Ultrasound Kennels CKC Registered Founded in 1976. I have always had a love for dogs as my Father and Grandfather raised dogs. However I took a liking for the Breed Doberman Pinscher. My First Doberman was a female called Sheba she was bought from a Breeder near Chesley, Ontario from Breeders Robert and Glenis Johnson which had a couple of litters and retired .

Sire of (Sheba) Hafenstadt’s C for Candace was KauKauns’s Ruff n Reddi a large Black Male Very Square and Solid He was Owned and Bred By Mrs Bee England of Crediton, Ontario.When She was 2 yrs of age I had Bred her and her first of 4 litters was 11 pups from her 3rd litter I kept a Black Female called Sasha and then my Breeding started , I have always Bred the Doberman to maintain a Square body, and always focusing on the Beautiful Temperament that Sheba had as Brains, Beauty and Health of the Doberman was so important.

As some Bloodlines have Cardio not as much back in the 70’s as they do today my Bloodlines will often reach 11-14 yrs of age I remember one dog reaching 16.

Over the Years I have continued to Breed and started to show Dobermans at First Joe and Janet Lobb Handled for me as well as Brian Casey . Then one day I just took on the challenge to go in the ring and on a small scale continued to show my Dobermans .

With many small wins over the years I became very interested in dog showing , and decided to travel to shows around Ontario and some other provinces of Canada .

In 1986 my Doberman Jackson won “ Award of Merit “ he was 10 months of age Quoted to me by Pat Blenkley that Jackson was the First puppy in the History of the Doberman to receive that Award of Merit. 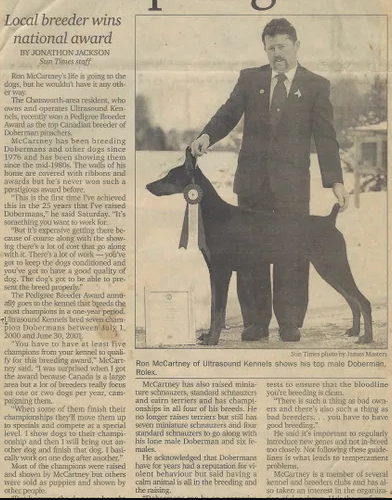 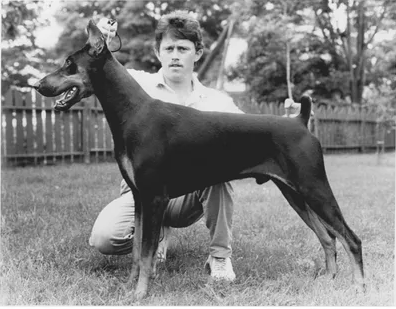 However as years went by I kept a Very strong focus on Breeding for Longevity to maintain a strong Heart as Dobermans carry that Genetic gene , in the 80’s I started to have my Dobermans Hearts checked By Dr. Mike O’Grady at the Guelph Vet College.

Mike O’Grady always loved my Dobermans for their Temperaments and that I had very Strong Hearts in my dogs , as much as any Breeder can try to be careful on any Health testing there is always that slim chance that anything can happen , as I came from a Family of Dog Breeding I learned at a young age that Genetic‘s can come out as far back as 7 Generations.

My Father Albert James McCartney that raised the Collie Type dog once told me if you like the dog that you may think that you would Love to Breed to check out his Parents and Grand Parents and check out Temperaments Health and Pedigree’s as they will play a Big Roll on the Genetic in the off spring as to the puppies from the litter that you expect to get.